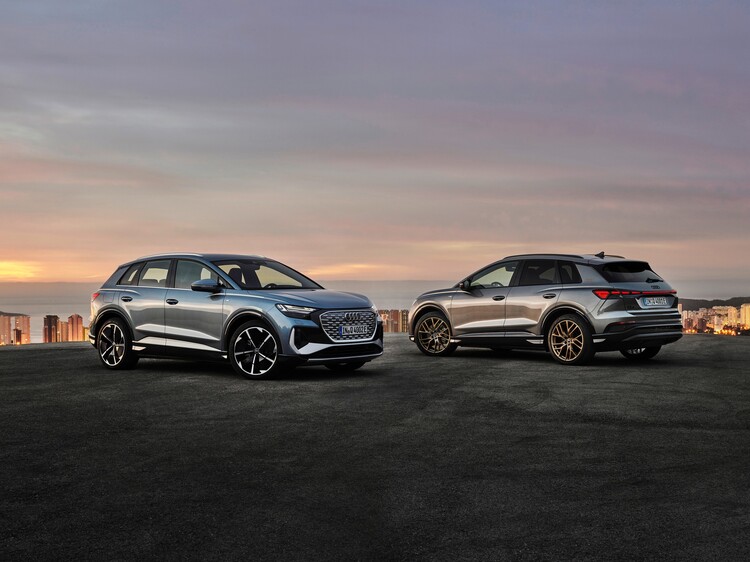 Audi has confirmed the new Q4 e-tron electric crossover will be priced from £40,750 and the Sportback version will cost from £42,250.

There are two battery variants and three drive configurations, offering a range of up to 316 miles.

The new model shares a platform with the recently launched VW ID4 and Skoda Enyaq iV.

At the entry-level, the Q4 35 e-tron and the Q4 Sportback 35 e-tron use a compact 52kWh battery and a 170PS electric motor. This is sufficient for 9.0-second 0-62mph acceleration and a WLTP-certified range of up to 208 miles on a full charge.

At the top of the range, priced from £51,370,  the Q4 50 e-tron quattro and Q4 Sportback 50 e-tron quattro utilise the same 77kWh battery but have two electric motors giving all-wheel-drive. Power output is raised to 299PS, while a range of 295 miles is expected.

The Q4’s footprint places it, perhaps unsurprisingly, between a Q3 and Q5 in terms of size. It also offers a 520-litre luggage compartment.

“The compact SUV has long been the go-to model type for many drivers, so I’m delighted that we are now shoring up our already strong position in this vital segment with two new additions that are not only paragons of good design and space-efficient packaging, but also standard bearers for the wider integration of fully electrified drivetrains across our range,” said director of Audi UK Andrew Doyle.

Aerodynamics formed a key part of the Q4 e-tron’s design and its body helps to maximise the available driving range by reducing drag. On the Q4 Sportback e-tron, the spoiler sits much lower on the split and steeply raked rear window, which helps to enhance its range by around seven miles.

Quick and easy charging is another element that Audi was keen to integrate into the Q4 e-tron. The smaller battery has a charging capacity of 100kW, while the larger unit can accept 125kW. This allows a charge from 5-80% in 38 minutes.

S line and Edition 1 versions of the Q4 e-tron and Q4 Sportback e-tron are equipped as standard with a sport suspension featuring particularly driver-focused spring and damper settings that also lower the body by 15 millimetres.

Along with the entry level Sport model, these versions are also available with adaptive dampers. Included as part of the standard Vorsprung specification, its control unit manages the characteristics of the suspension in line with the driving situation.

Inside, the Q4 features Audi’s Virtual Cockpit digital instrument cluster and a new 11.6-inch infotainment screen – the biggest fitted to an Audi model to date.

There is also a new augmented reality head-up display, which projects important information onto the windscreen. Key information and symbols appear to be floating virtually at a physical distance of roughly ten metres from the driver, and depending on the situation can even appear further ahead in some cases.

A bottle of this £5 hair conditioner sells every minute