Laptops, iPhones, speakers, and drones – everybody watches tons of tech reviews, and it’s one of our guilty pleasures as well. But the world of mainstream cars and gadgets wouldn’t have mixed without the arrival of the Ford F-150 Lightning, a really important all-electric truck with some cool features.

Tesla, of course, bridged the gap between the two genres. Their events attract a lot of gadget reviewers, while MKBHD has been an avid consumer of their cars, creating interesting content in the process. But the F-150 Lightning isn’t a Tesla; it’s a Ford, and that’s important.

Of course, tech reviewers have looked at cars before, but when Lew from Unbox Therapy looked at a Nissan Rogue, for example, it felt like forced product placement. Whereas the Lightning is clearly a truck he’d buy since he claims to have a Raptor.

And so, in a studio that looks exactly like Batman’s layer (and it probably is), the new F-150 Lightning receives a full review with help from Peter McKinnon. If you’re unfamiliar with him, the guy is a Canadian photographer and YouTuber who releases content about photography and cinematography with over 5 million subs.

Maybe that’s how they were able to pull off such an epic video intro. Forget about the specs of the Lightning, how it compares to a regular F-150, or its environmental impact for a second.

There’s no doubt that the Lightning will extend the appeal of the Ford truck, and it’s all down to the features. For example, the interior has that shifter that folds down into the dash. This allows you to have the center console into a table and work from there. Obviously, powering laptops isn’t going to be a problem in an EV.

And when you’re not editing landscape photos for Instagram, you and your friends could be chilling in the front trunk that doubles as a bench. Sure, any pickup bed works like that, but we’re talking cupholders and such here, plus it’s lockable.

The front trunk has four household sockets and USB ports as well, so the possibilities are endless. The next time you forget the wedding anniversary, the Lightning’s going to replace the couch. You’re never going to want to go back home!

The back is pretty versatile as well, with lots of outlets. And as for the interior, this ain’t no Tesla, but that’s probably a good thing. Buttons still control most of the functions, but a huge infotainment system still dominates the console, just like in the Mach-E. 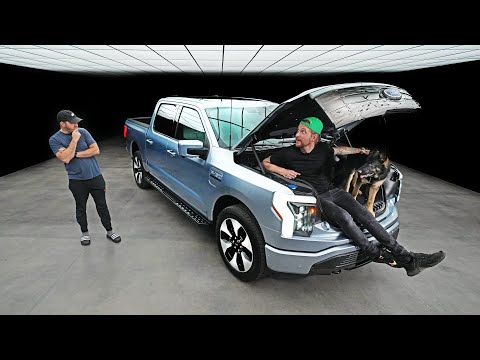 Long-Covid: Healed and yet not healthy – How...