Sandy Munro managed to have Donna Dickson in one of his latest videos. The Ford Mustang Mach-E chief engineer started the conversation by mentioning she inherited many of the decisions that were taken about the car, which was a pity. For the good aspects of the EV, Dickson had great explanations to offer. For the bad ones, she could not provide the rationale behind them, just what they appeared to be.

1 photo
That was the case about the decisions taken regarding the Mach-E’s rear motor. In the teardown of that component, Munro and his team were surprised to see that the electric motor had a parking pawl, which mechanically locks up the transmission. In an electric vehicle, with electric brakes, it would just add weight to the car. Dickson said Ford wanted to get this car right and “build it tough,” hence the decision. It was known territory. The chief engineer said future Ford electric vehicles would not use it anymore.

Munro then discusses how brilliant the front motor is. It does not even need to be compared with the rear one to stand out so much. Dickson clarifies that BorgWarner conceived the motors and that Magna and LGES (LG Energy Solution) helped to create them. For the record, the South Korean supplier is also in charge of the batteries for the Mach-E. The designs for the motors were also made outside, which means that Ford did not get so involved with them.

That is something we already discussed when we said automakers would soon manufacture their own battery packs. It seems to be the best way for them to have more control over the design and quality control of these crucial components.

Munro then proposes redesigning the rear motor for Ford and discusses with Dickson why the Mach-E still has wing mirrors. Apart from making aerodynamics worse, they are also a comfort nuisance by making a lot of wind noise when the car is driving fast. The chief engineer stresses that this is an issue with regulations that is yet to be solved.

When they finally address cooling, Dickson states that the Mach-E uses as much coolant as the Model Y and that she would be happy to share the data with Munro & Associates. What she concedes is that Ford has used a lot of hoses, connectors, and pumps. However, her explanation for that is that the company tried to concentrate them in the “engine bay,” so to speak. And that Ford is developing new components to improve that, such as its own version of an Octovalve.

One of the most interesting bits of the video is when Munro compares the EPA numbers of the Mach-E with those presented by the Tesla Model Y. We know they have to do with the EPA certification method Tesla chose more than with absolute efficiency, but Munro apparently is not aware of that.

Dickson says Ford has actions planned to reach 300 miles of range, which involve making the Mach-E lighter and improving battery efficiency, among “other actions.” The chief engineer probably refers to the the additional step in EPA certification that may allow it to present better numbers.

The sad bit is that those numbers are mostly a marketing argument. Edmunds already put these EVs to real-life tests, and the Mach-E AWD Extended Range exceeded its EPA range by more than 12%. On the other hand, the Model Y failed it by almost 10%. For the buyers, what matters is what EPA says.

Among the things that Munro praised are the device that allowed the Mach-E to avoid a regular door handle, the frunk structure, and the window module. Dickson said these were bright ideas the team had, and that helped the Mach-E stand out. Make sure you watch the entire video below. 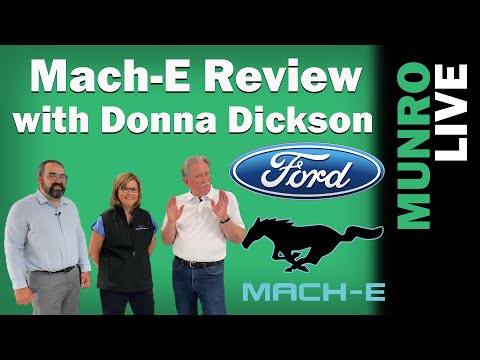 COVID-19 series: The year of the vaccine