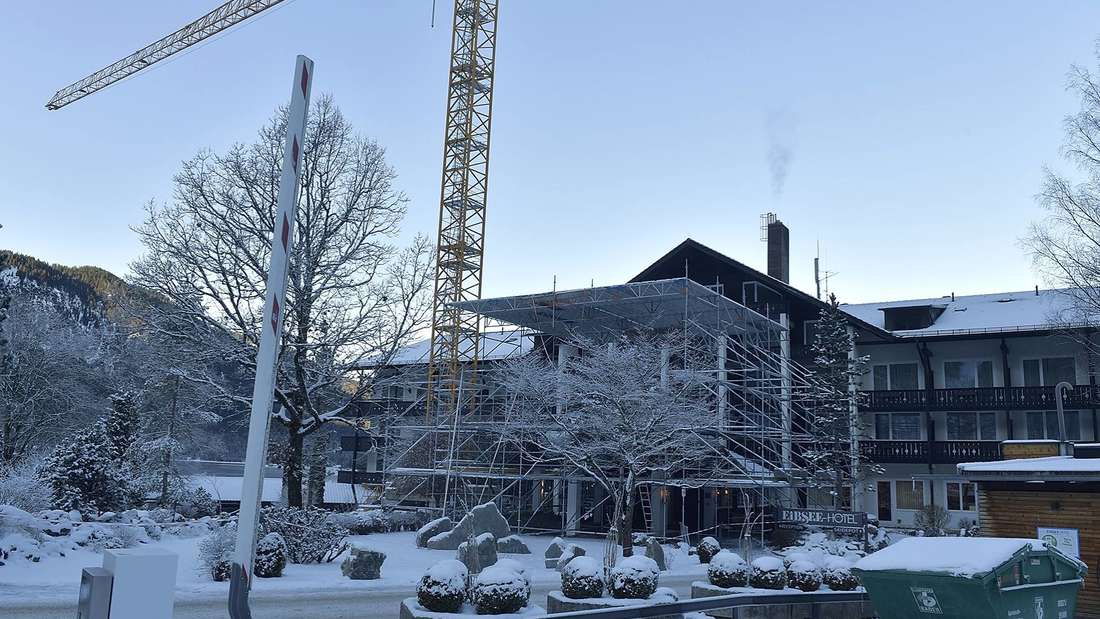 The Eibsee Hotel has been closed since October 4, 2021 due to extensive work.

The heart of the construction site is the crane: Since construction is taking place directly on the lake shore, there is no access.

Everything was lifted onto the terrace by crane.

The Hotel Eibsee and its owners are investing in the future and are massively renovating.

That’s why the four-star hotel above Grainau will remain closed until March.

which is so much bigger than it sounds.

The hotel has been closed since October 2021 and will remain so until March.

Hotel owner Marc Rieppel promises: “We will remain true to ourselves and our history”

Many regular guests have reported.

Will the picture of the Eibsee stay?

Or the painting by Carl Reiser.

Or – very important – the two old rocking horses that once spun in some merry-go-round before welcoming the guests at the entrance.

After their concerned questions, many sent a request: “Don’t do too much.” Marc Rieppel and everyone involved in the major project understood the message: “We remain true to ourselves and our history.” They would never give up their DNA.

Of course, the pictures – freshly framed – are hung up again.

And remembered the ancestors.

But there are some things that regular guests will not recognize.

Looking forward to the reaction of the guests: Olaf Buchberger (left) and Marc Rieppel.

Because directly connected to the previous restaurant, an additional one is being created on the former terrace.

The old area will also be completely renovated, opened up to the new one – the former outer wall has practically disappeared – and divided into different rooms and a buffet area.

225 instead of the previous 145 guests can dine at the same time in the future.

The need for space was an important reason for the conversion.

In addition, the consideration that you could actually only use the terrace four months a year, now twelve.

With the feeling of sitting outside with the sliding doors open.

“We bring in the view of the Eibsee,” says Buchberger.

The interior bears the signature of Rieppel’s wife Susanne.

It was important to her to be a little “cheeky” in general without losing her identity.

Modern areas can be found as well as classic ones.

The Zugspitzstube, for example, welcomes guests in Bavarian style.

Elegance awaits in the 1884 Salon with stucco and wall paneling similar to those seen in pictures from the early days of the hotel.

The name commemorates the year August Terne bought the lake.

The former terrace will become a restaurant with glass elements that can be slid open along the entire length towards the Eibsee.

However, nobody sees much of what costs money, nerves and work.

The building services, for example, which have been completely renewed.

In a building partly from 1916. Rieppel speaks of some surprises.

But all in all, the construction site is going very well with only long-term partners and craftsmen from the region.

Not much has changed at the Hotel Eibsee since 1977, when his parents completely demolished and rebuilt part of the hotel after it was returned by the Americans.

Not that much has been invested since then.

The seven million euros for the new restaurant are by no means the only investment in recent years.

The two sons of his sister Pia are just over a year old.

The 52-year-old hopes “that the following generation has so much heart and soul for the Eibsee that our history will live on”.

With a new restaurant that day trippers and locals will hardly visit.

As early as 2018, the family decided to only serve hotel guests.

Also to offer them an oasis in the summery weekend day tourist madness from which they can enjoy the Eibsee undisturbed.

This pearl of nature.

Meet the chef: Marko Laasonen on traditional Finnish cuisine, sustainable sourcing and a new wave of fine dining in Lapland