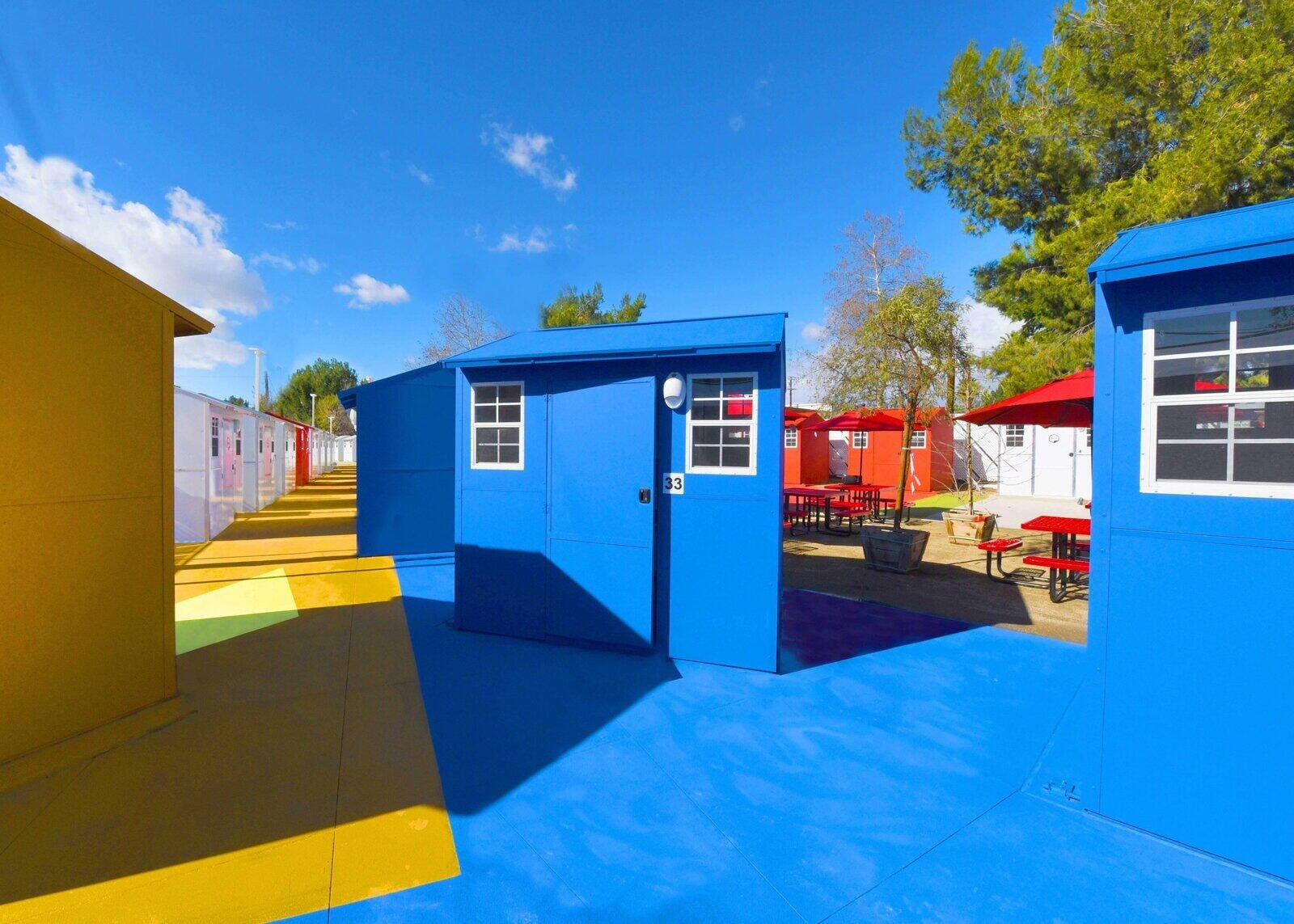 Homes are painted in bright colors to create the collective effect of a 3D painting.

They are described as a “bridge” shelter, taking people off the streets until they can move into permanent accommodation.

This is its response to LA’s mounting homelessness and housing crisis. Lehrer Architects has designed the city’s first tiny home village shelter in an oddly-shaped infill lot that was previously overlooked.

Designed and built in record time, just 13 weeks, already taught how to expedite and reduce the costs of subsequent projects to restoring houseless people’s lives by providing them with housing, as quickly and meaningfully as possible.

Lehrer Architects  has a long-standing philosophy of ‘no throwaway spaces’ aligns with the city’s mission to “seek out spaces that would be passed over by other developers for their size, shape, or lack of existing infrastructure, and transform them into functional land for use in the city’s ongoing effort to create more transitions to housing for the unhoused.”
archpaper

Tiny home village in North Hollywood recently began welcoming the first of its homeless residents as they travel along the pathway to permanent housing.

The defining feature of the projects is the use of color, which turns the strictly functional solution into a visually stimulating space that can foster a community.

The Chandler Boulevard Tiny Home Village in North Hollywood, the first of its kind in L.A., offers an alternative to the widespread tent communities filling the sidewalks and beneath freeways. Lehrer Architects designed the tiny prefab homes from Pallet.https://t.co/bZ99umtZQy

The village’s non-housing-dedicated structures include dining and gathering spaces, showers and restrooms, secure storage, support services, and more. The individual pitched-roof housing units—each come complete with air conditioning, heat, fold-down beds, electric outlets, and all-important locks. Residents also must be over 18 and abide by a strict no-alcohol as well as a village-wide curfew that provides some flexibility under employment-related circumstances. Pets are welcomed.
archpaper

This project is for people at all levels of the social ladder, but particularly those near the bottom.

EVs are changing the future of roadside breakdown – Wired.co.uk