Mr Trash Wheel: A rubbish collector with lots of fans! 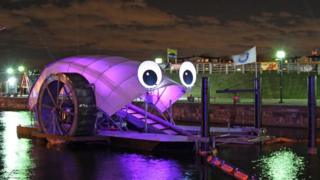 A rubbish collector, which floats along waterways in Baltimore in the US cleaning them up, has been attracting lots of fans online.

The ‘trash interceptor’ – known as Mr Trash Wheel – has gobbled up over one million kilograms of rubbish since its launch in 2014.

Mr Trash Wheel is a machine built to help keep city waterways clean, and its goal is to grab litter before it makes it to major rivers or the Atlantic Ocean.

It’s one of four in the city, with plans for more in other American cities like San Francisco, Atlanta, and beyond.

The Trash Wheels have become Baltimore attractions, with their own social media and merchandise.

How does Mr Trash Wheel work?

Currents in the river help turn the water wheels that power a conveyer belt feeding trash into the floating garbage interceptor.

The trash goes into a floating dumpster that’s emptied by a small crew of volunteers.

It helps to not only make the waterways cleaner but a safer place for wildlife to live too. 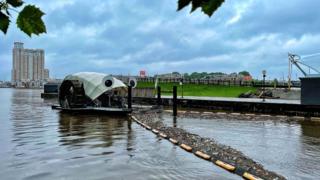 Mr Trash Wheel eats up all the rubbish in the river

The wheels are fitted with solar panels which means they are powered by the sun, so Mr Trash Wheel runs completely on naturally sourced power – the sun and the water.

John Kellet, the creator of Mr Trash Wheel said: “It’s kind of beyond my wildest dreams what’s happened in Baltimore, and it’s not only Baltimore. It has an internet following all over the world, and people come from miles away to come and see Mr. Trash Wheel.”

What ideas do you have for cleaning up your area? What would you design? Let us know in the comments!