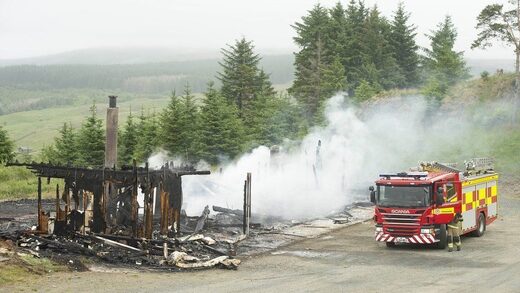 The Scottish Dark Sky Observatory in Ayrshire has been destroyed in a “suspicious” fire.

Emergency services were called to the site on the edge of the Galloway Forest Park at about 01:00.

A joint police and fire service investigation will be carried out to try to establish the cause.

The Scottish Fire and Rescue Service said it had sent four appliances to the scene in the early hours and crews remained on site.

There were no reports of any casualties.

Police Scotland asked any motorists with dash cams to check their footage if they were in the area. 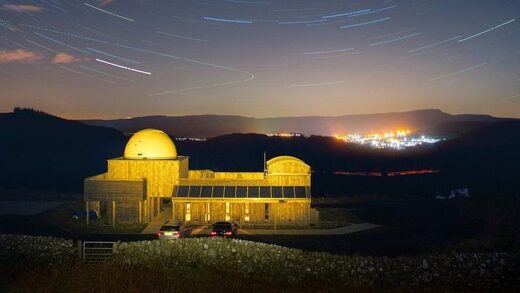 Det Con Steven Grey said: “The observatory is run by a charity organisation and the financial impact and damage caused is extremely significant.

“It is vital we establish the full circumstances surrounding what happened and I am appealing to anyone with information to come forward.

“The observatory is in a remote location and I would like to speak to anyone who may have been in the area on Tuesday night, into Wednesday morning.”

The Galloway Forest Park straddles the regions of East Ayrshire and Dumfries and Galloway and it achieved Dark Sky Park recognition in 2009. The observatory was officially opened in 2012.

Comment: Wikipedia provides a bit more information about the observatory:

It was situated on a hilltop site overlooking the Craigengillan Estate and Dalmellington. The site is located in the northern edge of the Galloway ForestDark Sky Park, and within the Galloway and Southern Ayrshire UNESCO Biosphere, with low levels of light pollution and clear horizon views.

The observatory was built through 2012 and was officially opened by then First Minister of Scotland Alex Salmond.[1] The building and facilities were expanded in 2017 with the addition of a digital planetarium, officially opened by the Lord Lieutenant of Ayrshire and Arran John Duncan.[2] After opening the observatory saw visitor numbers increase exponentially, making it one of the top tourist attractions in Scotland.[3][4][5]

The SDSO was open all throughout the year, with its main aims being to allow people of all ages and abilities to learn and experience the wonders of astronomy and space, and to be a vital educational resource to children in the region.[6]