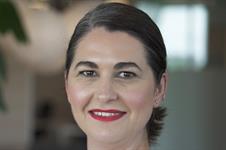 Ross-Wilson (pictured) joins Volvo on 1 December. She replaces Nikki Rooke, who is departing after four years in the role and almost a decade at the company.

Ross-Wilson had led comms at Ingka Group, the biggest of the twelve franchisees that operate Ikea stores, since 2016. She is a member of Ingka’s executive leadership team and leads comms across 30 countries.

Ross-Wilson was previously head of sustainability communications for Ikea Group between 2011 and 2016. Her other roles have included comms director at the Clinton Climate Initiative, director of comms at Bloomberg Philanthropies, and PR manager at Marks & Spencer. She worked agency-side at Ketchum with clients including Starbucks, Delta Airlines and Carlsberg.

“I want to give our warmest welcome to Olivia,” said Hanna Fager, head of corporate functions at Volvo Cars. “She is a modern leader with a deep and wide-ranging understanding of strategic communication, bringing valuable experience as we move towards becoming a fully electric car company. To cap it all, she knows the ins and outs of working with a brand that, similarly to Volvo Cars, has a rich Swedish heritage and creates products that are part of people’s everyday life all over the globe.”

Ross-Wilson said: “As a long-term fan and customer of Volvo Cars, I am very excited to be joining the company. The world needs brands and companies like Volvo Cars to thrive for the future, so I look forward to contributing to the inspiring journey they are on and to the success of its electrification strategy.”

Last year the company, which employs more than 40,000 staff, sold 661,713 cars in about 100 countries. Volvo Cars has been owned by Chinese multinational automotive company Zhejiang Geely Holding since 2010.