Bentley Motors certified for delivery its first car from a new, dedicated Excellence Centre for Vehicle Finish at the company’s celebrated factory in Crewe, England.

Following its meticulous production process, which combines traditional craftsmanship and state-of-the-art technology, every Bentley will now be finished in the new facility by a team of hand-picked craftspeople. Only upon meeting their exacting standards will it be signed off for delivery to Bentley’s customers worldwide. 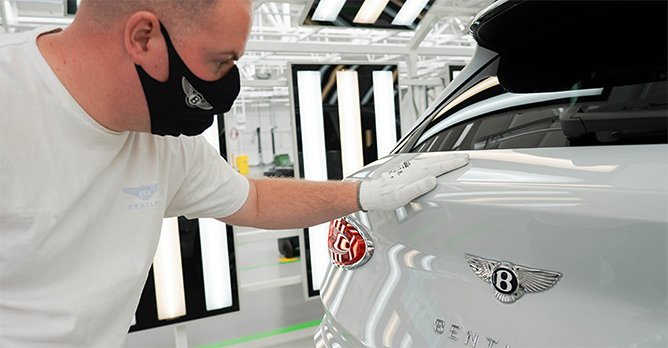 Every Bentley goes through an exhaustive 500 to 650-point checklist

At the facility, workers complete a 500 to 650-point checklist that takes more than two hours to complete. The result of this historic passion for quality is the fact that more than 80% of all Bentleys ever made are still on the road.

The new facility is based in the former Mulliner workshops where for decades the most secret, bespoke Bentleys were created. It was also the production line for the legendary Bentley Mulsanne, the epitome of luxury. Reimagined today as the Excellence Centre for Vehicle Finish, the modern, digitally-enabled facilities allow Bentley to meet unprecedented global demand for its product range today, while future-readying the brand in the face of rapidly evolving vehicle technologies.

Beyond the new Excellence Centre, Bentley’s ground-breaking Beyond100 strategy will see Crewe factory operations, already carbon neutral, becoming carbon positive by 2030.  It was the first UK automotive plant to achieve both the ISO 14001 environmental standard, and the ISO 50001 energy management standard.