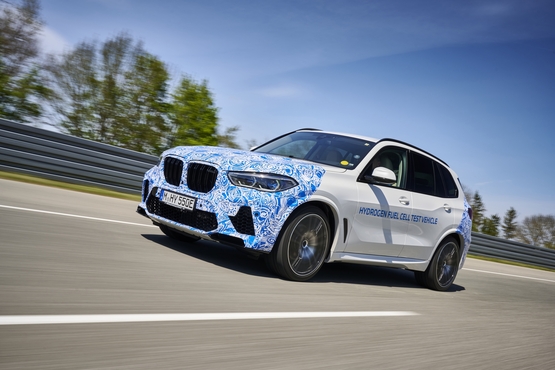 BMW has started the real-world testing phase of its i Hydrogen Next prototype, which is based on the existing X5 SUV.

The vehicle uses a BMW eDrive electric motor and a hydrogen fuel cell developed by Toyota. The collaboration between the two car makers started in 2013.

Engineers have started on-road testing to fine-tune the car’s software calibration and a small fleet of vehicles will be produced in late 2022 for “extensive field testing”.

BMW expects that the powertrain could enter series production by 2025, if the testing proves successful.

“Hydrogen fuel cell technology can be an attractive option for sustainable drive trains – especially in larger vehicle classes,” said Frank Weber, member of the Board of Management of BMW AG responsible for Development. “That is why road testing of near-standard vehicles with a hydrogen fuel cell drive train is an important milestone in our research and development efforts.”

The complete drive system in the combines hydrogen fuel cell technology with fifth-generation BMW eDrive technology – which can already be experienced in the BMW iX3.

Energy is generated in the fuel cell, which delivers an electrical output of 170PS. An electric converter adjusts the voltage to that of the electric motor, which powers the car. There is also a performance buffer battery for dynamic acceleration manoeuvres and short bursts of speed for overtaking. As a result, the system delivers a total output of 374PS.

Hydrogen fuel cell technology has the long-term potential to supplement internal combustion engines, plug-in hybrid systems and battery-electric vehicles and could become an attractive alternative to battery-electric drive trains – especially for those who do not have their own access to electric charging infrastructure or who frequently drive long distances.

Like the fuel tank of a conventional combustion-engine model, the hydrogen tank of the BMW i Hydrogen Next can also be filled within three to four minutes.

The intensive testing programme will be used to validate the efficiency, safety, convenience and reliability of all components, while ensuring the car is still able to provide a dynamic driving experience.