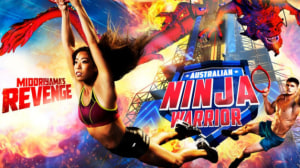 Nine has revealed six major sponsors for this year’s Australian Ninja Warrior season which kicks off on Sunday.

In its fifth season, Australian Ninja Warrior will feature bespoke in-show branding that compliments both the editorial of the series and the brands’ campaign messaging.

“Ninja Warrior’s return brings with it a stellar group of brand partners, all looking to capitalise on the exceptional communal viewing this family favourite delivers,” says Nine director of Powered Liana Dubois.

“We are thrilled to be working with each partner, using deep sponsorship effectiveness know-how to ensure we deliver strong ROI.”

Powered has produced eight integrated TV spots for AIA Australia, featuring four Ninjas and Australian Ninja Warrior sideline commentator Shane Crawford that reflects the brand’s ‘Small Steps to a Healthier You’ campaign. The sponsorship package will also include branding on digital perimeter screens around the obstacle course and in the pool.

Returning for its second year, Nutri-Grain will have branded commercial break ‘engagers’ recapping the in-show moments from Ninja runs. Nutri-Grain Ambassador Ky Hurst will also compete in this season as a Ninja.

Energizer, returning for its third year, will have its branding in-show on The Power Tower and bespoke branding on the on-screen timer shown during Ninja runs.

ALDI, in its second year of sponsorship, will have its branding displayed on the Leader-board and Hero-board.

Returning for its fifth year, KFC will be back as a premium sponsor through billboard association.

All sponsors will also have branding shown on digital perimeter screens around the course, while Bendigo Bank will have billboard association.

Have something to say on this? Share your views in the comments section below. Or if you have a news story or tip-off, drop us a line at adnews@yaffa.com.au