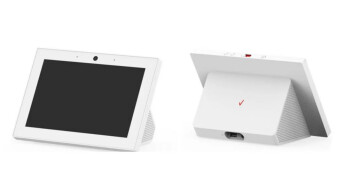 Although far from Verizon’s most popular products (or so we presume), the nation-leading wireless service provider actually sells a whole bunch of different smart speakers and smart displays manufactured by the likes of Amazon, Google, and JBL.

But Big Red is apparently planning to release its very own smart display as well, and this one will truly be different compared to the Echo Show or Nest Hub lines.

If the former two features are likely to sound familiar to those owning Amazon’s 2021-released Echo Show 8 (2nd Gen), the latter could well set the Verizon-branded product apart from virtually all of its competitors.
Of course, given that smart speakers and smart displays are not traditionally designed to leave a user’s home or move around very much, we can’t help but wonder exactly what purpose might the LTE support serve here.

Naturally, Big Red also plans to equip this bad boy with both Wi-Fi and Bluetooth technology, but the presence of a generous 4 gigs of RAM and 16 gigs of internal storage space suggests we’re looking at something a little more versatile and powerful than your conventional smart display.

The no doubt impending device looks distinctly different from the aforementioned second-gen Echo Show 8 on the outside as well (for better or worse) while relying on the same digital assistant to perform a variety of voice-ordered tasks.

In terms of supported services, the carrier’s BlueJeans video conferencing software is the only one confirmed at the moment, but there will obviously be others available at launch to rival what the Echo Show 8, Google Nest Hub (2nd Gen), and JBL Link View have going for them.